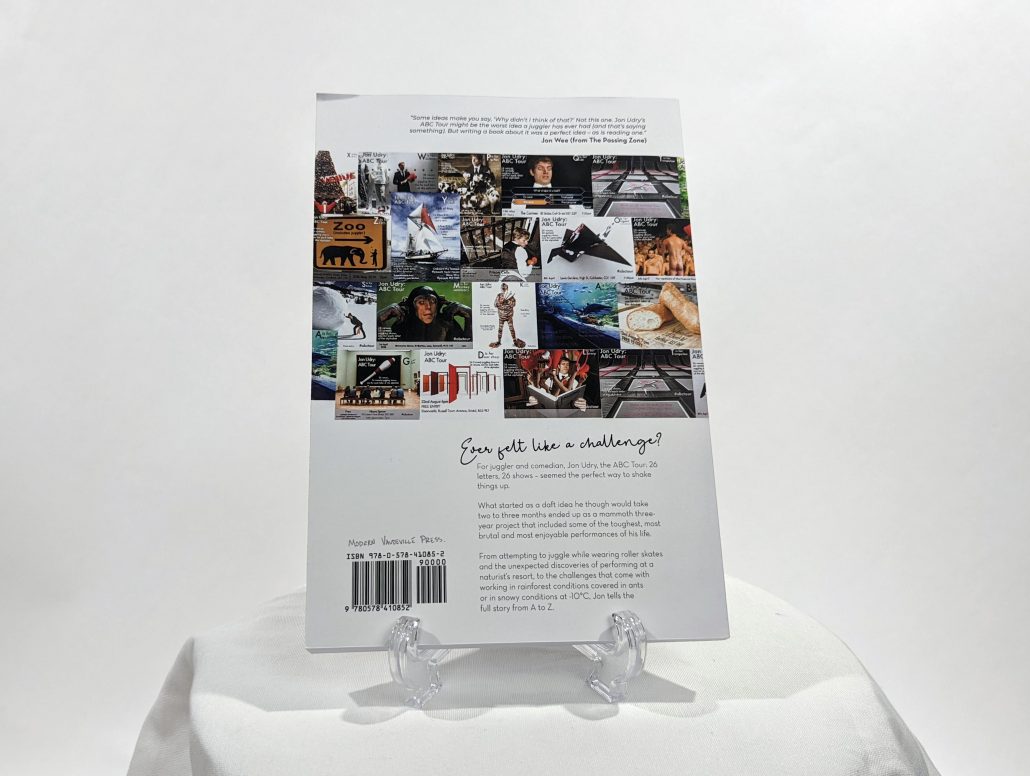 Ever felt like a challenge? For juggler and comedian, Jon Udry, the ABC Tour — 26 letters, 26 shows — seems the perfect way to shake things up.

What started as a silly idea he believed would take two to three months to complete, ended up being a mammoth three year project that included some of the toughest, most brutal and most enjoyable performances of his life. From attempting to juggle while wearing roller skates and the unexpected discoveries of performing at a Naturist’s Resort, to the challenges that came with working in rainforest conditions covered in ants or in snowy conditions at -10°C, Jon tells the full story from A to Z

This is a very funny book about an unusual and compelling idea. It goes right for the jugular. Luvvly Juggly.
Paul Whitehouse
Some ideas make you say, ‘Why didn’t I think of that?’ Not this one. Jon Udry’s ABC Tour may be the worst idea a juggler has ever had. (And that’s saying something.) But writing a book about it was a perfect idea. So is reading one.
Jon WeeThe Passing Zone

Juggler and comedian Jon Udry completed his ‘ABC Tour’ which involved 26 shows in 26 different venues, one for each letter of the alphabet.

The ABC Tour: A Juggler’s Journey from A to Z captures this remarkable achievement as Udry travels to very different venues, represented by A-Z chapter headings that organize this journey (“A is for Aquarium; B is for Bakery; C is for Castle; D if for Doorshop; E is for Eden Project; F is for Forest; G is for Gallery; H is for Hairdresser; I is for Internet; J is for Jail…”).

Jon’s rules for the tour, in addition to the consecutive nature of following the alphabet, added additional challenges, including: “One of the most important was that each location had to be a non-venue where you would not expect to see a show.”

By crafting and controlling the concept of a tour to make its incarnation even more unusual, reaching places and audiences unused to entertainment, Udry expands the nature of his craft to bring it to the attention of diverse audiences who might not otherwise have been exposed to juggling.

The tour took over two years to complete. This book represented yet another self-challenge, because Udry admits in his prologue that “I am a writer in the same way that someone assembling flat-pack furniture is a carpenter or that someone making beans on toast is a chef. That being said, here I am writing a book.” Even in print, the comedy shines.

If readers wonder how a performance artist can properly represent the art in written word, Udry’s title serves as the prime example of how different mediums can still capture an artistic endeavor.

From funding an unconventional effort that received only skepticism from business managers to the repeated challenges Udry came up with to accompany each venue visit, readers receive a lively set of insights that highlight the effort.

More than a collection of fun illustrations and juggling descriptions, Udry’s book excels in pinpointing the whimsy and logical thinking that went into his tour: “Perhaps you are reading this because you love alphabets and feel ambivalent towards juggling at best. If so, I apologise for the lack of alphabet-related content. That being said, if I am running a club of any type, and a stranger contacts me to offer a free show involving something I have no interest in – but could help raise money for my club or my chosen charity – then I would absolutely say yes. But I am also the type of person that would willingly choose to do twenty-six awkward shows in difficult venues for free.”

While performing arts libraries would of course be the logical group interested in The ABC Tour, it would be a shame to limit its audience to fellow performers alone.

Jon Udry’s ability to reach a non-juggling, non-performer audience with his wit and explorations of organizing tours and establishing their parameters will ideally reach book clubs and discussion groups interested in the intersection of comedy, sport, and performance worlds.

In and of itself, The ABC Tour is a representation of creative thinking that goes beyond its theme to reach audiences interested in exploring self-challenging efforts and ways of thinking outside the box, and is very highly recommended to a wide audience not just of performers, but all kinds of readers looking for creative, whimsical, and thought-provoking fun.